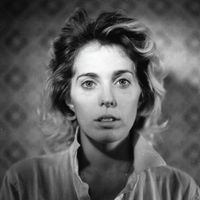 Having previously released through a number of labels, Half Free is coming out via 4AD. How are you finding working with them so far?

Oh, great: they’re like family already. (Laughs) They strike the right balance between business and, you know, just passion. It’s a good label and it’s the right fit for me.

This is your fifth album but, presumably, some people will be discovering U.S. Girls for the first time through Half Free. Do you think it functions as a good introduction?

Yeah, I think so. I think someone hearing this wouldn’t be too shocked by my earlier stuff. You know, it’s different but there’s still evidence of my earlier songs in there. But, yeah, people keep calling it my debut. (Laughs) I don’t care, it’s fine.

It’s a really diverse album. Was that the goal?

I think that’s just how it came out and so I left it that way, instead of trying to make it something where everything matched up. I’m interested in collage and I like lots of different kinds of music, so it’s just a natural thing for me to mix it up.

Was there a song that paved the way for the rest of Half Free?

I think it was the EP I did before this, called Free Advice Column, which I made with Onakabazien who made a few of the beats for Half Free. Working in a more beat-based way, and writing lyrics over that, was a really inspiring process which led to he and I making more beats. ‘Damn That Valley’ was the first track made for this record, and that was a beat that Onakabazien had that he used to rap over live. I always loved it, so when he shelved it, I said, “Can I have it?”

‘Damn That Valley’ is written from the perspective of a widow, right? Where did the inspiration come from?

This book called ‘War’ by Sebastian Junger, that’s an account of soldiers being stationed with the army in the Korengal Valley in Afghanistan. There are these stations in the valley, and where you’re at the bottom of the valley in the wide open, you’re very susceptible to people hiding in the hills shooting you. So the soldiers came up with the phrase “damn the valley”, and they would write it on the tanks, or on their helmets, or get it tattooed, and that phrase just really stuck with me.

As per your previous records, these songs are very much rooted in the female experience; most notably on ‘Woman’s Work’. What was the inspiration behind that song?

That came from thinking about people’s obsession with ageing, and how I think that usually it stems from some sort of fear of death. All the cosmetics and creams and all of that, you know? We say it’s about not wanting to wrinkle and wanting to stay beautiful, but I think deep down people are scared of dying and they’re trying to delay it as long as possible. And there’s the almost science fiction aspect of plastic surgery, with people who are taking it so far where they don’t even look human anymore. It’s very surreal and very sad but it also makes sense. In this day and age, nothing surprises me anymore

Do you feel privy to those pressures too?

I mean, I feel them as a consumer in terms of the type of adverts I’m faced with, and the image of a woman that I’m constantly bombarded with. But me, personally, as a somewhat public figure? It’s minimal. Because it’s false. (Laughs)

‘Window Shades’ is partly inspired by Katy Perry’s documentary ‘Part Of Me’, right?

Yeah. I watched it on a whim, not really knowing anything about her, and I was actually blown away. I was blown away by how honest she was, and her journey was one that I was not expecting to hear about. In the film it very blatantly shows her at the beginning of her relationship with Russell Brand, and shows how that disintegrated very quickly. She left all that stuff in and really shows the hurting she went through, just trying to have a relationship with that guy.

She seemed to be pulling the load in that relationship – going to see him whenever she had a break from her tour – which is probably what made it last as long as it did. But it made me think that if she had left it up to him, she probably would have never seen him again. Just that idea of yearning and longing for someone who doesn’t give a sh*t, inspired the lyrics.

Having watched that film very recently, it does seem incredible the amount of effort Katy made in comparison to Russell.

I know. I’m sure this goes both ways, but women I think are constantly in that position. And I don’t know how many guys I’ve dated that when I look back on it I’m like, “What the f**k? He was basically telling me don’t bother and yet I still was.” You know?

The film also changes your preconceptions about her as a pop star, documenting her background playing open mic nights.

Yeah, I didn’t know that either. I mean, and she play guitar and all that; she’s super-impressive, you know. It really made me respect her more, and gave a whole other angle on her obsession with childhood things and candy, and infantile sh*t that I just don’t get. There’s something about that I find really bizarre but then I think most of her audience is little girls so maybe that’s why.

There seemed to be lots of different cultural reference points threaded through Half Free. Are there any others we might not have noticed?

Well, on the cover I’m imitating a Bruce Springsteen photo. It’s a photo on the back of Darkness On The Edge Of Town. I made it black and white but, yeah, I was trying to recreate that. (Laughs) If you google “darkness on the edge of town photoshoot” I think you’ll see some of the shots and you’ll get it.

The title Half Free is pretty self-explanatory, but in what areas do you see that applying?

All areas. I think it’s man, woman, child, elderly person, animal, the planet – everything. We’re all of us a slave to something; something’s holding us back, something’s keeping us apart. Sometimes we convince ourselves that things aren’t holding us hostage, but I think it’s a myth that we are free to make our own choices. I don’t just think it’s true.

Is there anything you’ve learned about yourself as an artist in the making of this album?

Oh yeah, I mean I think I’m going to be learning things ‘til the day I die, basically. With this record, I gained some confidence but I also learned that collaboration is important and that I need other people, and that I’m strong on my own as well. I can do both, and both are valid. The things I do alone are different to the things I make with other people, and they’re still important even though my skill set as a producer and musician is more limited than some of the people I collaborate with. My expression when I’m producing and playing is still important, and I need to include that and not be so worried about anything being technically great.

I’m touring. I’m opening for Peaches on the West Coast in the States from 15th October and then I come to Europe and do four weeks here, and then I go home at the end of November and tour the East Coast and the Midwest. I’ll have a singer with me and it’ll be loud, so bring earplugs.