Four years since his superb synth-pop debut, Michael Lovett is back and joined by Hot Chip’s Sarah Jones and former Ash-guitarist Charlotte Hatherley. We met him to hear how Daft Punk, touring with Metronomy, and science-fiction all inspired the “sexy apocalypse” that is Infinite Summer. 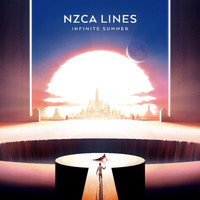 It’s been four years since your debut. Did you always intend to take time out?

No, no, it just happened. I was actually at university when I released [the first album], in my second year of an illustration degree. I started writing new music immediately after finishing working on that record, but then I wanted to do a second record which was in a similar vein to the first one – slightly like a narrative-inspired thing – but I wanted to make everything a lot more Technicolor and a lot more defined.

On the first record, I was really into reading Jorge Bourges and all this very wistful fiction which didn’t really ever give you a full picture of what was going on, and that was the way that the album was. For better or for worse, I thought it would be good to try and do something really vivid this time. So I made the video for ‘New Atmosphere’, which I did as my final project for my degree, and which was originally inspired by seeing Daft Punk’s ‘Interstella 5555’. But getting that video made took a lot of my time. I had almost an album’s worth of songs by that point – and I even submitted songs for coursework – but then I felt like only four of them were good by the end of it. And directly after that I was asked to go and play with Metronomy, so that just all ended up delaying it. Even then, we had a finished version of [the record] a year ago, and I decided I wasn’t really happy with it and added some more songs, and got the whole thing mixed again.

Which songs did you add?

‘Two Hearts’. That was a demo that I’d been really struggling with. Finding the right way to frame it took a really long time, and I must have written about three or four different vocal melodies for that song. ‘Jessica’ was a different version originally too, and ‘Chemical was Obvious’. In amongst all that, before I started doing the Metronomy stuff, I worked on this album by Christine and the Queens, helping produce and playing on the album. She’s amazing. She writes all the stuff, but it was basically just me working with some drum machines and changing the sounds.

Do you think working with Christine and the Queens and Metronomy shaped Infinite Summer in any way?

Yeah. Even before I started playing with Metronomy and Christine, the idea was to have songs that you could dismantle to just be a piano and a vocal. The first album was me experimenting and finding out that you could layer up three layers of vocals, and do all this R&B stuff. This time it was just about being a bit more musical about it, so I was definitely inspired by the way that Christine uses incredible simplicity in her songs.

With the Metronomy thing, I’ve always looked up to what Joe’s done. I mean, lots of people say that NZCA Lines sound like Metronomy, and I don’t really agree but it’s inevitable. I feel like I validate it as well, because I actually play live with them. Before that tour, I’d never really played in a band like that before. And I hadn’t played guitar for ages, so I started to play guitar again – purely because I’d been doing it with Metronomy – and that went on the album.

I really wanted to change the live band completely too. I had a lot of backing tracks before, and friends playing who were amazing but who didn’t really play the instruments that were actually on the record. I knew I needed somebody who could really, really play keyboards and sequenced drum parts, and who could sing. So it was amazing to get Sarah [Jones] and Charlotte [Hatherley] on board, and contributing loads to the recorded album as well.

How did you know Charlotte and Sarah?

It was all entirely through Sarah, initially. I knew her through a friend, and then she also knew Charlie (Alex March, producer). She got in touch with Charlie because Charlotte Hatherley had been looking for people to do a bit of writing with – or to help her produce some songs – so I ended up co-writing a song with Charlotte for her Sylver Tongue album two years ago, which she’s just finishing off now.

I’m not very good at thinking ambitiously: I didn’t think that either of them would be interested in playing with NZCA Lines. But I asked Sarah if she’d be up for playing some drums and she said yeah. And then I realised I really needed some female vocals for these songs, and it turns out Sarah sings amazingly, and it was perfect for the album. And she suggested asking Charlotte to be involved. Again, I was like, “Oh, she won’t want to do it,” but she did! (Laughs)

Infinite Summer is underpinned by a quite complex sci-fi concept. Where did the inspiration come from?

I spent a summer reading science fiction and I realised that a couple of the books really gelled with the ideas that I was already thinking about. With ‘Solaris’ by Stanisław Lem, it was the Apollonian and Dionysian sides of people, and the way that we acquire knowledge.

And in ‘The City and the Stars’ by Arthur C. Clarke, there’s a far-future thing where it’s set on earth but there’s this one remaining city which is a very advanced, enclosed environment, where everyone’s superficially happy. And one person realises there must be something else beyond the wall. So they go out and they find another group of people living in a very wholesome way in this sort-of countryside. And then there was also ‘City’ by Clifford D. Simak, and ‘The Drowned World’ by J. G. Ballard.

Can you explain the concept to us?

The album is kind-of a funky apocalypse. A sexy apocalypse. (Laughs) The idea was that of a far-future world in which the sun has expanded into red giant stage, and we’ve only got a century left before the world is going to end. The other idea was that the world was divided into two hemispheres. One half has been destroyed by the approaching solar glares, and the other side is artificially protected. And on that protect side there’s a city that consists of the patina of different civilisations; all grand monuments and huge temple-like buildings, But it’s all very static and there’s nothing new happening. People are partying because there’s nothing else to do, so there’s this sheen of glamour and excess but underneath is this sense of dissatisfaction and an absence of hope.

Then, on the other side, people are actually building the atmosphere – which is why the first song on the album is called ‘New Atmosphere’ – and exploring the need for creativity. It’s about the need to create something even in the face of everything falling apart; they’re still trying to be creative for creativity’s sake. So that was the basic setting for the album. The first half of the record is a little glitzy and upbeat, and the second half is more melancholic and introspective, and that’s the two halves of the world.

Also there’s this central protagonist who decides he’s not happy living in the city, so he goes on this journey through a gigantic forest, finds this other world he didn’t realise existed, falls in love with somebody and then she dies – tragic ending. (Laughs) And that’s what the ‘New Atmosphere’ video is.

You don’t necessarily need to understand the whole concept to enjoy the record, however. On a surface level, it functions as a story of loneliness.

Yeah, you definitely shouldn’t have to understand the concept to enjoy it; that’s exactly what I wanted. And that’s also why you can’t really strong-arm lyrics into being about the concept, because then it just turns into bad prog.

Over the course of actually working on the music, I found it good to have this lofty concept, but actually what ended up being in the songs is quite personal. Transferring myself into someone else’s shoes gave me a distance which enabled me to deal with my own emotions. But yeah – without going into too much detail – I’ve been trying to conduct a long-distance relationship for a couple of years with my girlfriend who lives in New York. But one of the songs goes way back to the break-up of my previous relationship. I think the first album was a lot more playful in terms of the lyrics and I definitely made a decision to be a little bit more serious with this one.

Is there anything you’ve learned in the making of this record?

Sometimes you think that you’ve really nailed it first time, but actually it takes you a few tries to get there. So I think it’s good not to get too attached to things initially, to keep challenging yourself and not be precious, which is difficult to do. Equally, the vocals for ‘Persephone Dreams’ are just demo vocals; I never ended up re-doing them because the emotion was in there. So allowing yourself to be spontaneous is important too. I think I would like to be a bit more playful in the future, and show another side to my personality.

So are you planning to take another four years between this and the next album?

No. (Laughs) It’s crazy because some people think this is my first album, and so it feels a bit like I’m starting from scratch again. It’s a bit daunting. There’s such a massive amount of music out there. You work on one track on and off for years and it gets to be someone’s track of the day, and the next day it’s something else. That’s just how it is, really.

I feel like I’m in a very different position to when I finished the last record. I’ve done so much more stuff musically and I’ve learned a sh*tload, so I just want to crack on as soon as possible with making new stuff.